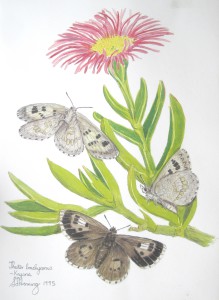 Described by Trimen in 1883, this species was formerly very common around Knysna. Upperside dark greyish-brown with black markings, and underside a mottled grey with cryptic markings that camouflage it when sitting on the ground or on vegetation. Males establish territories on patches of bare ground or low vegetation. Larvae do not feed on plants but are fed mouth-to-mouth by ants in their nests. Over a century of developments have gradually eliminated it from its former haunts until today it is only known from three small breeding colonies east of The Heads. Flies in December and January. Assessed as Critically Endangered in the latest Red List.

Print of painting by Stephen Henning.

Be the first to review “Thestor brachycerus” Click here to cancel reply.