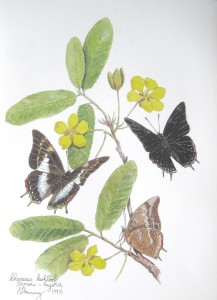 A seldom seen subspecies from the George-Knysna area, only described in 1994 by Rydon. Males are black above, whereas females have bluish white band down the middle of both wings. Undersides cryptic mottled brown with black lines. Forest species, seldom descends, but attracted to fermenting fruit or animal dung. Larval foodplant Ochna arborea (Cape plane), and larvae are pale green with creamy white patch on back and russet coloured horns on head. Flies from October to April. Not considered endangered because the Knysna-George forests are protected.

Print of painting by Stephen Henning

Be the first to review “Charaxes karkloof trimeni” Click here to cancel reply.