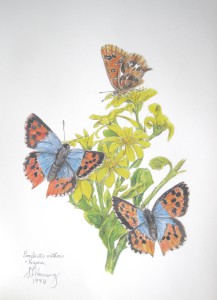 Very rare subspecies only described in 1994 by Pringle. Upperside reddish orange with black spots and base of wing broadly silvery-blue. Female paler than male and has less blue. Undersides cryptic with brown and fawn markings to conceal butterfly when perching on the ground or on shrubs. Inhabits sandy ground amongst bushes of its suspected larval foodplant Chrysanthemoides monilifera (Bitou). Flies from October to April. Assessed as Critically Endangered (Possibly Extinct) in the latest Red List.

Print of painting by Stephen Henning.

Be the first to review “Chrysoritis thysbe mithras” Click here to cancel reply.