The Waterberg Copper butterfly was originally discovered at Perdekop near Jan Trichardt’s Pass in the central Waterberg in 1982 by Dave & Esmé Edge (Edge, 1982). It had not been seen for 21 years (last specimens collected in 1992), despite extensive searching by LepSoc members (Dobson & Garvie, 2005). The butterfly had been initially misidentified as E. acraeina but it was formally recognised as a distinct and endemic South African species in 2010 (Gardiner & Terblanche, 2010).

LepSoc Africa initiated the Custodians of Rare and Endangered Lepidoptera (COREL) programme during 2011 (Edge, 2011).  COREL was initiated to address the urgent conservation needs of 15 Critically Endangered (CE) taxa in South Africa. Jeremy Dobson, Chairperson of the Highveld Butterfly and Moth Club (HBMC), and Owen Garvie (also HBMC) were appointed as custodians of this butterfly. After a further lack of success to locate new localities in 2011/2012 (Edge, 2014), Dobson produced a “wanted” poster and reward for anyone rediscovering the butterfly. 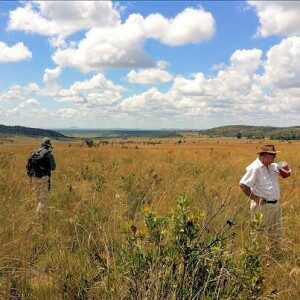 Habitat at the Bateleur Nature Reserve

The butterfly was then rediscovered on 2 March 2013 by Mark & Tildie Williams in the Bateleur Nature Reserve (BNR) north of Bela Bela, some 40 km from its type locality. This exciting find received wide publicity on the internet and in the media. In the recently published South African Butterfly Atlas, Erikssonia edgei was assessed under the IUCN criteria as Critically Endangered (Mecenero et al., 2013).

The loss of E. edgei from its original locality in the mid 1990’s took place despite knowledge of its life history (Henning & Henning, 1984) and a conservation effort by the authorities (de Wet, 1995). It is therefore of the utmost importance that a scientifically researched and sustainable conservation plan is put in place as soon as possible so that we do not lose the species from the new locality. The owner of BNR, Wouter Schreuders, has pledged his support to these efforts and has agreed that the land will be managed in accordance with future research findings.

The two known areas where the butterfly has been found are separated by 41 km. The vegetation type in which both localities are situated is quite widespread throughout the Waterberg Mountains, so the possibility exists that it could have a more extensive distribution.

The type locality habitat is savanna, in vegetation type Waterberg Mountain Bushveld (SVcb17 – Mucina & Rutherford, 2006), and is situated near the base of the west flank of the Perdekop hill. The substrate is deep reddish sand, with a slope of 3 degrees (De Wet 1995). The tree component of the vegetation consists of Ochna pulchra Hook. f. (Ochnaceae), Burkea africana Hook. (Fabaceae) and Protea caffra Meisn. (Proteaceae) (De Wet 1995).

The BNR localities are also in the savanna vegetation type SVcb17, and are mainly grassland with sparser trees than at the type locality. The first locality lies in the middle of a wide open amphitheater surrounded by low hills, with a green vlei area in the centre of the amphitheater. This locality (coordinates 24° 40ʹ 50 ʺS; 28° 10ʹ 58ʺ E, altitude 1550 m) is close to a red sandstone/quartzite outcrop of small boulders and rocks, some of which display yellow and green-coloured lichen. The second locality (coordinates 24° 40ʹ 38ʺ S; 28° 10ʹ 30ʺ E, altitude 1580 m) is beyond a game fence in a saddle area between two rocky hills forming the western perimeter of the amphitheater. This locality has a mixture of different grasses and although no solid sandstone outcrop is present, several lichen-covered boulders occur amongst the shallow stands of grass stems.

The adults are now known to fly from November to April. They fly slowly and weakly in open grassy areas with sandy soil, and do not range far from their host plants. The males usually stake out small territories amongst the host plants where they can be found most of the day. The females fly at random across the area and are less common than the males. Both sexes sometimes bask in the sun, lying on their side to get maximum heat uptake, and they often feed on flowers. The bright colouration may act as a deterrent to predators, and the adults may in fact be toxic due to poisons sequestered (in the larval stage) from its poisonous host plant. 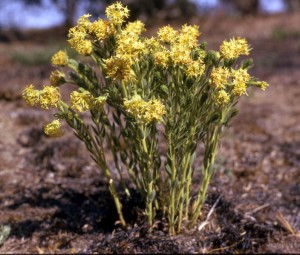 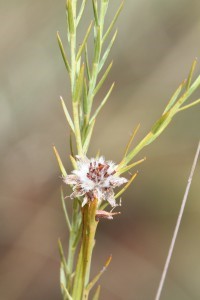 Henning & Henning (1984) and Henning (1984) discovered and described the life history from observations at the type locality. They found the larval host-plant to be Gnidia kraussiana Meisn. var. kraussiana (Thymelaceae), and the larvae were associated with a Lepisiota ant species. More recently, investigations at the BNR have revealed that E. edgei also oviposits on, and the larvae feed on, Gnidia microcephala Meisn., as well as on G. kraussiana which also occurs at the BNR. Both of these host plants contain poisons which the larvae are able to deal with and their bright colouration may also signal that they are poisonous to predators.

The population of butterfly appears to have been in steep decline since it was rediscovered at Bateleur on 2 March 2013. Reasonable numbers of butterflies were observed during the following 2013–2014 season; approximately half as many specimens were on the wing in 2014–2015 and half as many again in 2015–2016. In August 2016 the veld at one of the two colonies (the southeast site within the Bateleur boundary fence) was subjected to a controlled grass burn, planned by LepSoc Africa and paid for by the Brenton Blue Trust. During the course of the 2016–2017 season, following the fire, a handful of adults were observed, but none from the un-burnt (northwest) site. A pair of butterflies were seen on 3 January 2018: these were the only records for the 2017–2018 season and they are the last known records of E. edgei. On 31 August and 22 September 2019 E. edgei could not be found at either site. The veld condition at the southeast colony was poor, with very few flowers and a growing invasion of Seriphium plumosum (so-called “bankrupt bush” and an indicator of over grazing). The northwest site, had an unplanned (natural) burn during winter, and the vegetation looks more promising, although the Lepisiota ants were not detected, and the butterfly has not been seen at this site since February 2016. During recent visits on 14 December 2019 and 15 March 2020 E. edgei could not be found. Further site visits will be made in the 2020–2021 season, and the possibility of the butterfly having moved some distance away will be explored.

The main threats are perceived to be either over-grazing or under-grazing and an incorrect fire regime. The loss of the population at the type locality was probably as a result of not managing these factors correctly. It is not at this stage known why the butterfly disappeared from the Bateleur locality.

It is likely that the two most important and inter-related management factors influencing the population are grazing intensity and fire. High grazing intensity leads to a decrease in fire intensity so even though the herbivores may not graze the Gnidia host plant it is their influence on the habitat which changes the conditions for Gnidia growth.

It is therefore important to promote the conditions that lead to maximum growth of the host plant, and we should focus on practical aspects of land use management. A historical study of the land use practices is needed, since these past conditions were obviously suitable for the species. Experimentation with different levels of herbivory, possibly by establishing a fence around one of the localities, would enable it impacts to be gauged. Medium intensity herbivory was introduced to the area about two years ago.

Soil type could also very well be important – most species of this genus are known to prefer sandy conditions – but E. edgei appears to be on more loamy sand than its congeners.

The programme below was proposed and commenced by the researcher, R.F. Terblanche, but due to the butterfly’s disappearance this had to be placed on hold.

Dobson, J. & Garvie, O.  2005. A report by the Lepidopterists’ Society of Africa on the current status of the South African population of Erikssonia acraeina Trimen, 1891 (Lepidoptera: Lycaenidae). Metamorphosis 16(3): 67–71.

Edge, D.A. 1982. Rediscovery of a rare butterfly. Rostrum, Newsletter of the Entomological society of Southern Africa 2: 2.