Although the Brenton Blue Butterfly Reserve (BBBR) effectively came into being in early 1998, it was only proclaimed as a Special Nature Reserve on 4 July 2003. 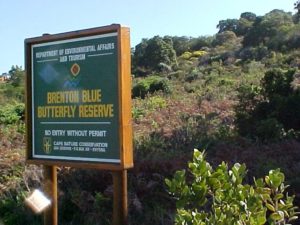 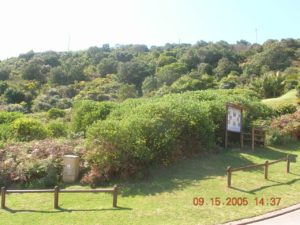 The SNR is 1.6 hectares in extent, and lies between W K Grobler Drive in the north and Fynbosoord in the south. Its western and eastern boundaries are adjacent to residential properties. It lies at an altitude between 90 and 115 metres above sea level, and slopes in a southerly direction. 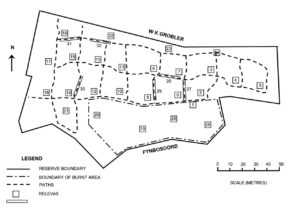 The SNR is also home to many other butterflies, an amazing variety of fynbos and thicket plants, which attract the presence of many birds and mammals.

Geologically, the reserve is sited on an ancient dune whose core has become compacted into rock, overlain by wind blown sand deposits and a shallow soil layer (0.5 – 2.0 m deep). The climate is very mild (average 12.5 – 23.5 ºC), with abundant year-round rainfall (annual average 750mm), and frequent sea fog and mists. The vegetation is a complex mosaic of candlewood thickets and asteraceous fynbos. The SNR has a large population of the food plant of the Brenton Blue butterfly, a small plant in the pea family with pink flowers. 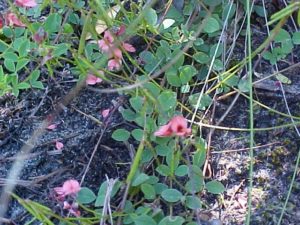 The SNR is managed by the Brenton Blue Management Committee (BBMC), established by the Trustees in 1998, which meets quarterly. The current members of the committee are:

The BBMC produced an Environmental Management Plan (EMP) for the SNR in January 2001, subsequently revised in 2008.

Management policy has been cautious, taking great care not to do anything that could harm the butterfly populations or its food plant. It became clear by early 2000 that some interventions were necessary since the reserve was seemingly becoming overgrown with thicket elements, and the butterfly population was in decline. Consequently a controlled burn was carried out in September 2000 in the lower 20% of the reserve. Paths were cut through the rest of the reserve to improve access for butterfly and food plant monitoring (Figure 5). Subsequent observations proved the beneficial effect of these paths on the food plant and butterfly populations, and the unsustainability of burning as a management method. Consequently current management strategy is based on path maintenance, selective removal of thicket species, and a zero tolerance alien control programme. Annual maintenance costs are currently less than R 10 000, and are funded by the BBT.

The land north of W K Grobler (Uitzicht 81) and a public open space contiguous to the SNR (erf 542) are owned by the Knysna Municipality (KM). KM and CN have negotiated a contract nature reserve agreement which will effectively expand the SNR from 1.6 ha to 15 ha. Alien vegetation has already been brought under control on these properties with the assistance of CN and SANParks.

Following the June 2017 fire, which badly burnt the reserve and its infrastructure, guided tours have been suspended until further notice.